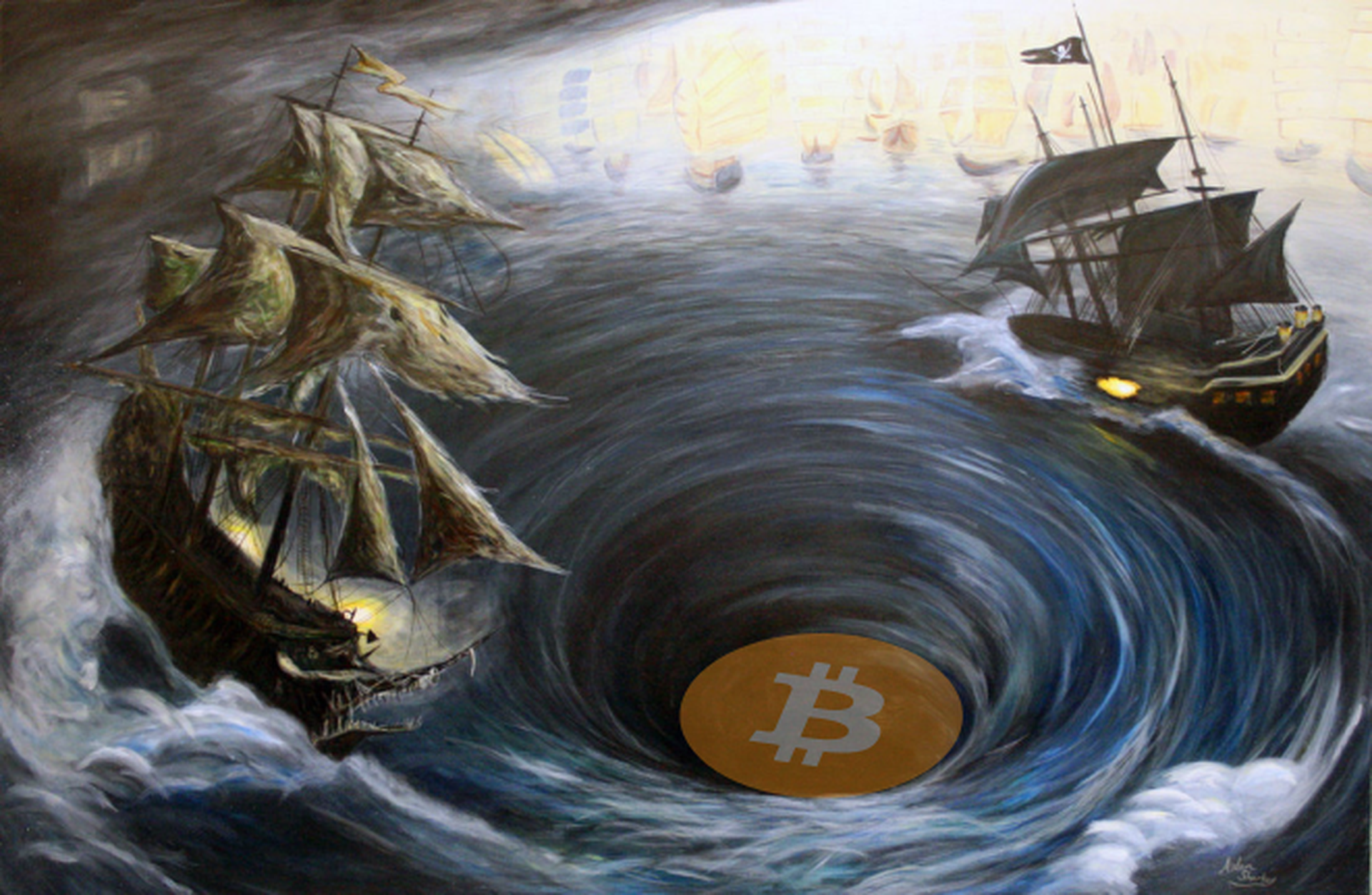 A couple of weeks ago I had the immense pleasure of giving the opening talk at the Value of Bitcoin conference. I would like to revisit some ideas of this talk and maybe dig deeper into some parts. After all, my keynote The Bitcoin Journey was restrained by time: 21 minutes.

Again, I will look at the Bitcoin journey in two parts:

Part 1: The Journey of a Bitcoiner

The natural reaction upon encountering Bitcoin for the first time is to dismiss it. Most people reject the idea that Magic Internet Money could work, or could be interesting, or could fix any woes that society might have. Outright dismissal was my first reaction as well: “Oh, this will never really work. It will get hacked one day and all your funny internet money will be gone.” Alas, at least I can find comfort in the fact that I’m not alone with my initial reaction. While some bitcoiners understood the gravity of the situation immediately, most of us mere mortals had to be confronted with Bitcoin multiple times before we took a closer look.

In short, the journey of a bitcoiner usually goes like this:

Falling down the Bitcoin rabbit hole can feel a little bit like being stuck in an M.C. Escher painting. Up is down, down is up, a lot of things don’t make sense at first, and the longer you look at it the more confusing it gets. However, there is some order to this chaos. It’s just not apparent at first.

The reason for this initial confusion is, I believe, twofold. First, Bitcoin is extremely interdisciplinary. It spans a lot of topics, even if you just want to get a rudimentary understanding of it. You will probably have to learn some cryptography (at least what the difference between a public key and a private key is), some computer science (how does a decentralized network differ from other computer systems), some trading (where can I buy bitcoin and why does it have the price it currently has), and some game theory (who controls Bitcoin and why is it so hard to change or shut down) just to get started. Curiously, the deeper you dig, the more disciplines will pop up: macroeconomics, scalability, elliptic curve cryptography, monetary policy, the history of money, the measure and study of scarcity, smart contracts, programming and scripting languages, incentive structures, laws, regulations, privacy, security, psychology, even biology. The list of topics is practically endless.

This idea is quite beautifully illustrated by what I would call The Bitcoin Flower (Unchained Capital, 2017) and The Bitcoin Learning Spiral (Block Tower, Ari Paul, 2018).

The downside of this multidisciplinary nature is that understanding Bitcoin doesn’t come easy. The upside is that many roads might lead you to take a closer look at Bitcoin. In other words: many entries lead down this particular rabbit hole. Whether you have a background in computer science, finance, trading, cryptography, physics, economics, are a gold bug, a classical liberal, or have flirted with the idea of cryptoanarchy. All these backgrounds can give you a head-start.

What is interesting, though, is that so many people from so many different backgrounds arrive at the same conclusion: bitcoin is the money of the future. While the rabbit hole has many entries, in the end, all roads lead to Bitcoin.

Part 2: The Journey of Bitcoin

Thus, we can identify three stages:

Stage N is important because Bitcoin’s underlying NgU technology requires that bitcoin has some value. Once it acquires value — any value — Bitcoin’s eternal feedback loop kicks in.

Satoshi alluded to this feedback loop in his writings.

“It might make sense just to get some in case it catches on. If enough people think the same way, that becomes a self fulfilling prophecy.” — Satoshi Nakamoto

Over the last couple of years all kinds of people — artists, researchers, quants, traders, commentators, in short: bitcoiners from all walks of life — noticed that Bitcoin seems to come in waves. In 2018, Hasu and Nic Carter published Visions of Bitcoin, describing the various competing narratives that were used to describe Bitcoin up to this point: e-cash proof of concept, censorship-resistant e-gold, cheap payments network, programmable shared database, anonymous darknet currency, reserve currency for crypto, and finally: an uncorrelated financial asset.

If the model holds, we are about to enter Phase 5. How Bitcoin will manifest in this phase will be known only in hindsight.

Another analysis regarding the wavy nature of Bitcoin was done by Unchained Capital, first published in 2018. Their HODL Waves beautifully show the age distribution of the Bitcoin UTXO set. In essence, we can see that a certain percentage of people choose to hold bitcoin for the long term, i.e. for several years. They identified various HODL waves just by looking at the UTXO age: the Genesis HODL, the HODL of 2011, and the HODL of 2014. By looking at the most recent data we can also identify a HODL of 2018.

The most entertaining analysis is this video by Alex Millar, published in 2015. He is looking purely on price, showing how bitcoin tends to accrue value in a massive run-up, only to crash down hard a short time later. However, the price floor after the crash is usually way higher than the previous low, resulting in an upwards trend in the long run.

These various phases and waves show that Bitcoin has a cyclical nature. We already saw how demand, price, and security form an eternal feedback loop. However, many different aspects of Bitcoin are cyclical. Adoption, development, mining, difficulty adjustments, reward eras — all of them are cyclical. Granted, the halvings will stop in about 120 years, but the other cycles will most likely continue.

The essence of Bitcoin, the one thing that is truly unchanging, is the output of the system: the UTXO set. Nodes work together to constantly append it, verifying blocks and transactions, adding what is valid and discarding what is invalid. The chain tip is the shared understanding of all nodes: the version of the ledger which is most accurate and up-to-date.

Similarly, people are building a shared corpus of knowledge and mental models trying to figure out what Bitcoin is. Bitcoiners work together to constantly add to the knowledge, incorporating what is valid and meaningful, discarding what is invalid or doesn’t make sense. Our shared understanding of Bitcoin can be seen as a Schelling Point: the conclusion that most people arrived at after intense study, often without indoctrination or communication with others.

Just like Bitcoin is a game without an end, falling down the Bitcoin rabbit hole is a journey without an end. Bitcoin is an ever-changing, organic system. It will evolve, as will our individual and collective understanding of it. In other words: I believe that the reason why no-one has found the bottom of the rabbit hole yet is that there is no bottom. The rabbit hole is circular. In the coming years and decades, many people will try to fully understand what Bitcoin is and what it might become. But try as we might, I’m afraid a complete understanding will never be gained. We will all have to find our peace with this alien technology, or we are bound to walk in paradoxical circles around it in our quest to full comprehension.

In the end, if Bitcoin continues to be successful, it is bound to disappear. Just like the internet and electricity before it, it will move to the background, like running water in your home or the air you breathe. Everyone will take Bitcoin for granted. Consequently, bitcoiners will disappear. Just like today, you don’t have to identify as an “internet person” anymore, in the future, you won’t have to identify as a bitcoiner anymore. When this day comes, we will have entered the final stage.

I hope you have enjoyed this article. If you did, feel free to share it, translate it, drop some applause on medium, or even some sats via the beast that is Bitcoin. You can also support me on Patreon. If you have any suggestions, feel free to drop me a line. Thanks for all the encouragement and your generous support, and thank you for reading.