The Magic Dust of Cryptography

How digital information is changing our society 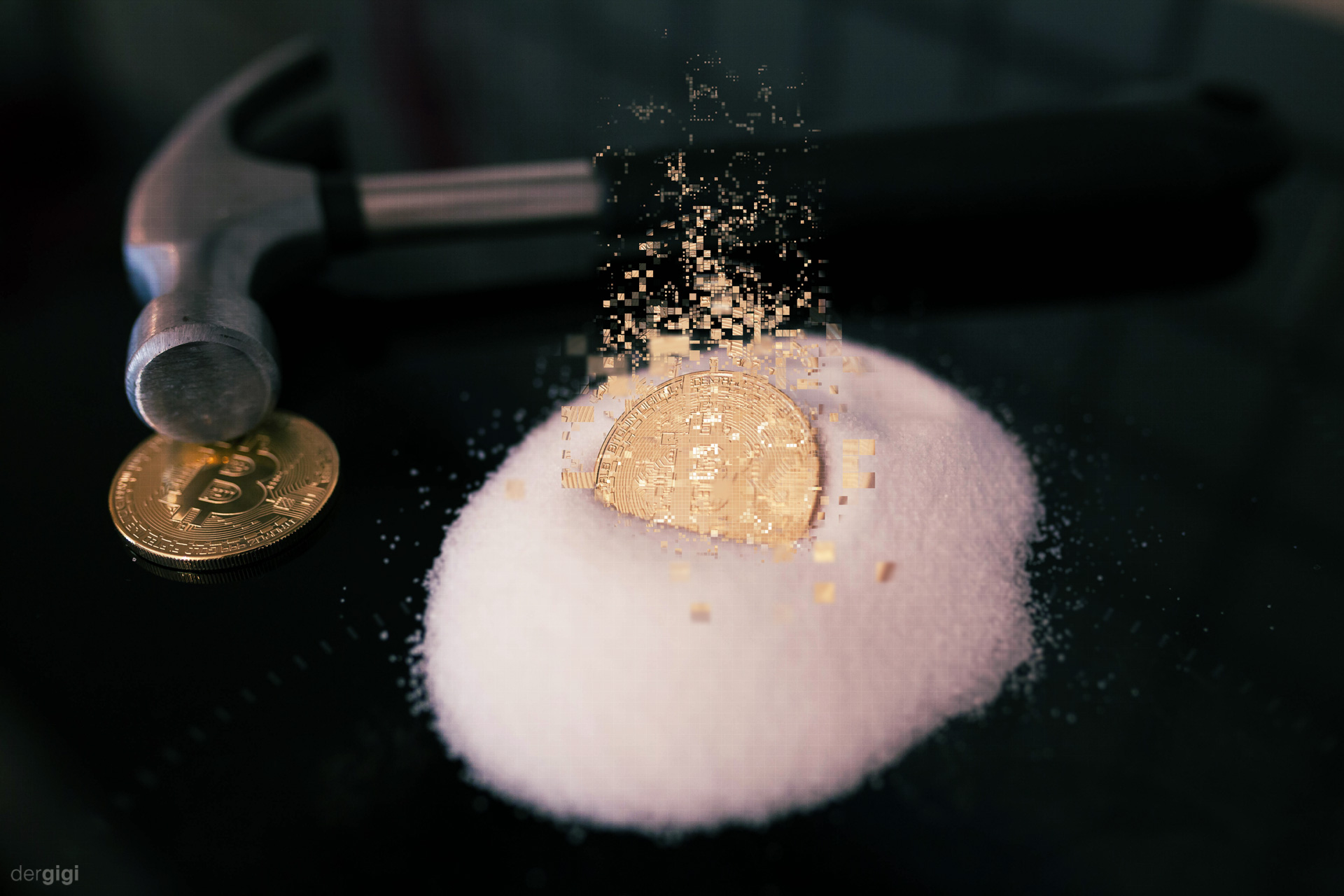 Imagine you have a hammer — a magical hammer — which can smash anything into pieces with one stroke. Not only that, this hammer can completely pulverize everything it touches into a fine gray dust.

Further imagine that there was a magic potion, one drop of which will turn the heap of dust back into the item you smashed.

This leads to some interesting questions.

Suppose you want to visit a country and you want to bring your favorite pair of pajama pants with you. The only problem, however, is that pants are illegal in this country. Maybe it’s a weird country, or maybe that’s the reason why you want to go there in the first place. Either way, I don’t judge.

Now, remember that you are in the possession of this magical hammer. You use it on your pajama pants, and *poof*, you have a tiny bag of gray dust which you can put in your pocket. The pocket of your jacket, of course, because you will be asked to leave all your pants at the border!

Where exactly are the pajama pants now? In the dust? In the potion? Do they currently exist? Does the concept of “your pajama pants” even make sense, if all you have is indistinguishable gray dust and a tiny drop of a magic potion? What if you would only need a drop of water, and speak some magic words, to turn the dust back into pajama pants? What if the dust was ubiquitous, everywhere on earth?

We, as a global society, are currently in the process of moving from the physical realm of things to the digital realm of information. We are quickly moving towards the fantastical world of no-pants land, and we will have to update our current conceptions of things if we want to stay sane.

Many things which used to be on pieces of paper are now digital: your train ticket, your boarding pass, tickets to a concert, debit cards, credit cards — all of these already moved from being printed on paper to a bunch of zeros and ones, decoupled from the physical realm we are so used to.

Even those pieces of paper which encode value itself are slowly but surely moved to the purely digital realm. A rising number of people are willing to convert their hard-earned paper money into bitcoin, leaving the world of physical money behind completely.

Over time, more and more valuable pieces of paper will be eaten up by this digitalization. Soon your driver’s license, your passport, your birth certificate and other documents will be digital.

Why is this a big deal? Digital information is quite different from physical artifacts. It can be easily scrambled, taken apart, and put together again. It has completely novel characteristics compared to the physical stuff we are so used to. It can be duplicated perfectly, checked for authenticity instantly, and hidden in plain sight. Information is independent of a physical substrate and thus can take virtually infinite forms.

What the full implications of this digitization will be is impossible to tell. We are not accustomed to this world of information: devoid of physical form, touch, and smell.

Remember the tale of no-pants-land? Let’s return to this weird and wonderful world, but with a twist: your pajama pants are now your passport.

Let’s say you have a properly encrypted digital passport and a decryption key of sufficient length. You put the encrypted passport in one place and the key in another place. Where is the passport, exactly? A or B? Somewhere in between? Does it even exist? Does the question of “where” make sense in the first place?

Does the concept of “your passport” even make sense, if all you have is access to the internet and some magic words?

Warning: The following section contains example private keys. Do not import any sample keys or send bitcoins to the associated addresses; you will lose your money.

Take Bitcoin as another example: you are no longer in possession of physical coins, or any physical artifact for that matter. No amount of calling these things coins can change that. Even hardware wallets don’t change that. You possess a piece of information, your private key, which allows you to spend your funds. Effectively, your private key is your money, which in turn is information. Thus, your money is pure information.

A private key is just a bunch of random bits. It can be encoded as a bunch of zeros and ones:

It could also be heads and tails, as pointed out by Andreas M. Antonopoulos in Mastering Bitcoin:

The bitcoin private key is just a number. You can pick your private keys randomly using just a coin, pencil, and paper: toss a coin 256 times and you have the binary digits of a random private key you can use in a bitcoin wallet.

The same information can be represented as a regular number:

We can also use the hexadecimal system to represent this number, to keep things a bit shorter:

An even shorter representation would be the wallet import format:

The same information can be encoded as a mnemonic code, resulting in these 24 words, which you could remember with a bit of practice:

Or, if you’re Japanese:

Of course, we can also encode this information as various images.

You can also be more creative and hide a bitcoin private key in a piece of art:

You get the idea.

Why is this a big deal? Our current way of doing things is adapted to the physical, not the digital world. Some laws and regulations which made sense previously might not be very useful in the abstract space of zeros and ones.

Central banks now have no way of stopping competition by just passing laws as they have always done. They are now up against a digital competitor that most likely cannot be brought under the physical world’s laws.

Governments and corporations will continually try to outlaw certain kinds of information. It is likely that the last battle of the crypto wars hasn’t been fought yet, and yet it seems that it will be harder and harder for governments and companies to outlaw the use of these algorithms. After all, these mathematical magic tricks are themselves information, making them virtually unstoppable in the very same way as the information they manipulate.

As long as we aren’t under the rule of a worldwide totalitarian dictatorship, people will continue to exercise their freedom of speech to print encryption algorithms on t-shirts, design flags to distribute cryptographic keys, and sing songs containing illegal information.

Any piece of digital information is representable as a number; consequently, if communicating a specific set of information is illegal in some way, then the number may be illegal as well.”

You might think that the tale of no-pants land featuring your favorite pajamas is silly, but we are already living in this world — fairy tale or not.

Let’s pick a specific example: When crossing U.S. borders with a big bag of money, you are required by law to declare how much money you have on you if it is more than $10,000:

This is easily enforceable if you bring an actual bag of money with you. Let’s assume you have more than $10,000 in bitcoin. Where exactly is your money? Is it in the blockchain, i.e. everywhere? Is your money your private key? What if your private key was on a small device? What if you bring it with you in the form of just a couple of words on a piece of paper? What if it was a QR code tattooed inside your lips? What if you had a billion dollars stored in your brain? Would you have to declare these words in your brain?

That’s the tricky thing about information: it isn’t a thing. It transcends the physical realm.

These alien concepts are slowly but surely creeping into our daily lives, changing the power balance of society as they get understood and adopted by more and more people.

Like all tools, cryptography is neither all good nor all bad. If used and understood properly, it can be a liberating force. It can enable people to safely speak out and help disseminate information where it would otherwise be censored. It can guarantee freedom of speech and anonymity. It can also enable unstoppable crime, lead to accidental loss of data, and enable new forms of blackmail and extortion. If abused by tyrants, it can be a force of oppression. Despite all this, we should neither fear nor dismiss these technologies. We should strive to understand them.

We are already living in a world where both a totalitarian techno-panopticon and an anarcho-capitalist system dreamed up by cypherpunks is a reality.

Computers turned the abstract world of mathematics into tangible machines which interact with the world. The Internet connected these machines creating a global, borderless network. Cryptography and decentralization are making information exchange on this network unstoppable. What will happen if more and more things will become pure information? What are the consequences of unbreakable and censorship-resistant codes?

We are entering a new era. An era where information can be put in digital safes which can’t be opened by force. An era where you can transfer value globally and near-instantly without anyone’s permission. An era where physical artifacts can be downloaded and printed for near-zero marginal cost. An era where world-changing inventions can be made by unknown entities. An era where you can turn anything into magical cryptographic dust and all you have to do to turn it into something meaningful again is to speak some magic words.

Addendum: The xkcd comics used are from issue 504 and 1553. Wikipedia has a great article on the Free Speech Flag. The 3d-printed gun above is called The Liberator, the code of which can be bought as a book on Amazon.